The 19th of January 2019, marks one sad year since the moment the restless spirit of our dear Bro Luka Stanchev departed to the Eternal East. VW Bro Luka Stanchev was the Past Grand Tyler of UGLB, holder of the “Ivan Vedar” Award and Honorary Member of the Lodges: “Dagata na Plovdiv”, “Trakia” and “Balkanska Zvezda”. His place in the Temples of our Lodges remains empty, but he will forever remain in the chain of our hearts. 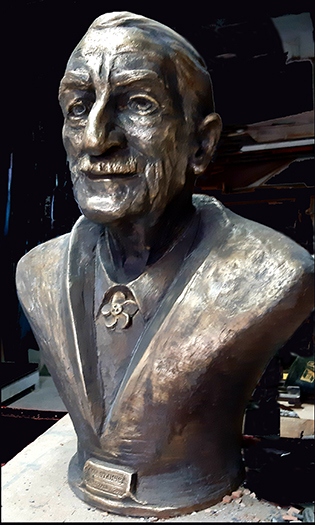 The Memorial service on the 21st January 2019 in the church “St. Petka” in Plovdiv, brought together both brothers and citizens from Plovdiv, united in their grief over the death of the much loved and spiritually enlightened brother. He was a long-time leader of the Citizen’s Committee of Plovdiv and was posthumously recognised with the prestigious award “Honorary Citizen of Plovdiv”.

During the funeral at the Central Cemetery in Plovdiv, brothers from all over Bulgaria, united in a fraternal chain around his grave for a last farewell.

A lot can be said about the contribution of Brother Luka Stanchev to Freemasonry and to Bulgarian society, but one year after his death, let us recall what he achieved during his lifetime with our sincere appreciation of his work.

Brother Luka Stanchev himself bequeathed to us many of his Masonic papers which will always resonate in our hearts because of his sincerity and humanity. To recall the sacred spark that flowed from each of his written lines, we chose his paper “I have time to share with others”, which we published in the Bulletin of UGLB (today’s Chronicle) in our issue from January 2013. Two months later on the 2nd of March 2013, he was presented with the Honorary Award “Ivan Vedar” by the Grand Master of UGLB – MW Brother Ivan Sariev in the Temple of “Balkanska Zvezda” Lodge in Ruse.

The Chairman of The Beehive Foundation, MW Brother Ivan Sariev, PGM of UGLB, supported by the Lodges “Kapitan Petko Voivoda -Garibaldiets”, “Trakia” and “Dagata na Plovdiv” as well as individual brothers, supported the creation of the documentary film “Luka Stanchev – the man who paves roads”, from the series “Contemporary Bulgarian Revivers”. The script of the documentary, as well as direction and cinematography was Brother R.G’s creation, and it addresses the deep spiritual impression Bro Luka left upon our souls by his love for our motherland Bulgaria and for his staunch defence of the legacy of our common history and culture that we share with all peoples of the Balkans: