The 145th Anniversary of the birth of Atanas Burov

Wreaths and flowers from the Brethren were laid at the monument of the patron of “Atanas Burov” Lodge in Gorna Oryahovitsa. 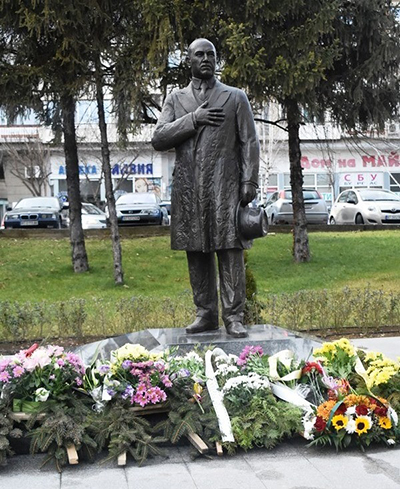 On the 30th of January 2020, in the town of Gorna Oryahovitsa a solemn celebration was held at the monument of Atanas Burov (1875-1954), on the occasion of the 145th Anniversary of his birth.  Atanas Burov was a famous Bulgarian banker and politician, and also a Freemason. Additionally, he is the patron of “Atanas Burov” Lodge in Gorna Oryahovitsa.

Many public figures, intellectuals, students and citizens laid wreaths and flowers at his monument in the town centre of Gorna Oryahovitsa, which was commissioned and sponsored by the Brethren from “Atanas Burov” Lodge, together with the help of all the Brethren from UGLB.

The Brothers from “Atanas Burov” Lodge, led by their Master Brother N.I., also laid a wreath at the monument of their patron, accompanied by Brothers from other Lodges from the town of Veliko Tarnovo.

In the paper “Atanas Burov gives hope to every young and ambitious Bulgarian”, presented in one of the Lodge meetings commemorating the life and work of their patron, is the following:

Atanas Burov is one of the most prominent figures in the political and social life of the Third Bulgarian Kingdom. He was born on the 30th of January 1875 in the town of Gorna Oryahovitsa. Burov left a lasting mark in the history of our country with his activities as a banker, industrialist, politician and statesman. Two of his maternal relatives were fighters for the independence of the Bulgarian Church, namely: Ilarion Makariopolski and the writer Stoyan Mihajlovski.

Atanas Burov graduated in financial and political science at the Sorbonne, Paris. Towards the end of the 19th and the beginning of the 20th century he returned to Bulgaria.

He participated in the management of the joint-stock company “Badeshte”, in the Bulgarian Commercial Bank, the insurance company “Bulgaria”, as well as many other companies. He was one of the leaders of the People’s Party and one of the founders of the Democratic Alliance. He was Minister of Trade, Industry and Labour (1st of June – 4th of July 1913; 7th of October 1919 – 16th of April 1920), Minister of Foreign Affairs and Religions (4th of January 1926 – 29th of June 1931), Minister without Portfolio (2nd – 9th of September 1944).

After the 9th of September 1944, his key position in the political and social life of the country ceased to be. He became a victim of repression and was sentenced by the People’s Court to one year in prison for his participation as a minister without portfolio in the government of Konstantin Muraviev (2nd – 8th September 1944). He was released after 6 months and in 1996, by the verdict of the People’s Court the original sentence was overturned by Decision 172 of the Supreme Court of 1996. In 1945 he was briefly released and subsequently interned in a camp. He was once again arrested in 1950 and sentenced in 1952 to 20 years in prison on charges of leading an organisation to weaken and overthrow the established government through a coup and acts of terrorism. He died in the prison in Pazardzhik on the 15th of May 1954.

As a long-time member of the People’s Party, he was one of the supporters of the establishment of the United People’s Progressive Party. He was a shareholder in the Bulgarian Commercial Bank (1919-1923 and 1940-1946).

A significant moment of his biography is that when the Balkan War was declared, he quickly graduated from the School of Reserve Officers and according to some sources, was the only incumbent MP who volunteered. Burov took part in the battles near Chataldzha, and after the war he was awarded the Order of Courage for his fighting in a hand-to-hand combat, during which he was almost killed. After his demobilisation, he returned to politics, first as Deputy Speaker of the National Assembly and then as Minister of Trade.

He was known for his eloquent speeches in the National Assembly. In one of his speeches he said:

We must be Europeans if we feel we need Europe. In the name of the sacred interests of Bulgaria, in the name of the bloody sufferings of our people, let us make a promise to give every effort to be able to present ourselves to the European public conscience.

Atanas Burov is a significant figure for Bulgarians, because our generation genuinely needs role models such as him to enable us to lay the foundations of a value-system relevant to our life today.

At the end of his life, Atanas Burov left this message to us:

The age during which I was growing up was a difficult and turbulent age! The laws were strict but fair. The younger you learned those rules, the less you repeated the mistakes of those smarter than you who learned their lesson before you.

If we closely examine the life and work of Atanas Burov, inevitably each of us will discover the truth he seeks, as long as he has the intellectual capacity to find it. Because in a life dedicated to the well-being of the Fatherland, there is everything; both good deeds, and bad.

Burov gives hope to every young and ambitious Bulgarian even today: Where there is a mind, the money comes by itself. And with all his life as a banker and mason Atanas Burov proved this to be true. In his life he invariably followed the biblical truth: In order to receive, one must first give!

Thus, the Mason Atanas Burov gave to the generations that followed him his most significant intellectual wealth – the personal example of his life.

In 2000 Atanas Burov was declared an Honorary Citizen of Gorna Oryahovitsa.